As we traversed through Boston from the airport to the hotel in our Lyft to celebrate one year of martial bliss and the birthday of America; the cleanliness, prosperity and construction boom occurring in this great American city was evident. Boston is where the American Dream started. The idea that “the will of the people” would decide public policy was put into action with the Boston Tea Party on December 16, 1773. No Taxation without Representation, Huzzah!!!! 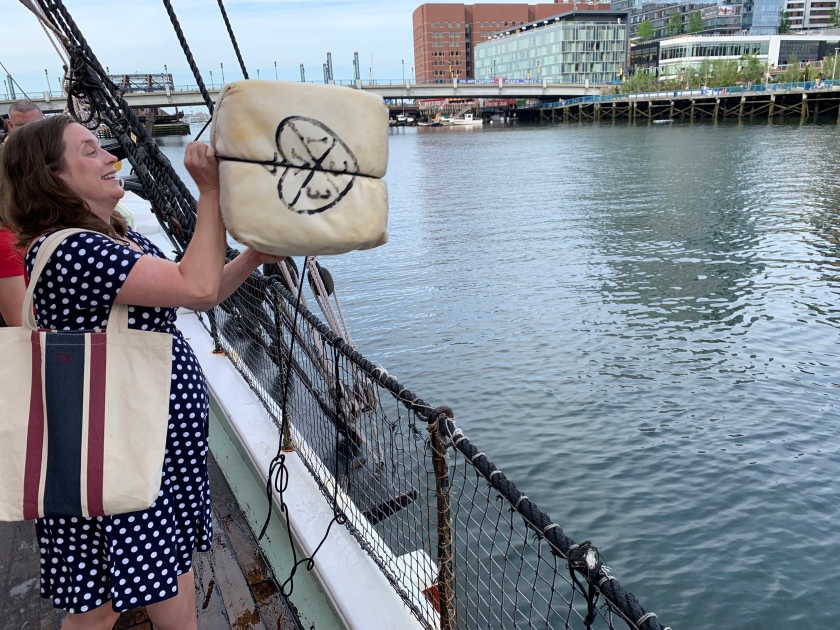 The first sense of maybe not everything was as perfect as it appeared, came when the Australian Lyft driver (he was not happy when I guessed South African) aka Marathon Man Trent Morrow, said  “You guys are lucky no one is working today it’s usually gridlock driving down here.”

Marathon Man dropped us off and we checked in, then ventured into Southie to grab breakfast. The Aloft hotel in the Seaport District had provided us with a pamphlet of surrounding spots and when I saw that Anthony Bourdain had visited The Galley Diner on his show No Reservations I knew where we were heading.

This place did not disappoint, it was a perfect spot for breakfast on Independence Day. We sat at the counter of this family run diner (is there anything more uniquely American than a diner) to our left were 4 police officers, to our right a Hispanic family from out of town, it was truly a wonderful display of Americana. The breakfast was not too shabby either, between the blueberry pancakes, kielbasa and Hash omelet, it was one of the best breakfasts I ever had. The perfect combination of savory and sweet. 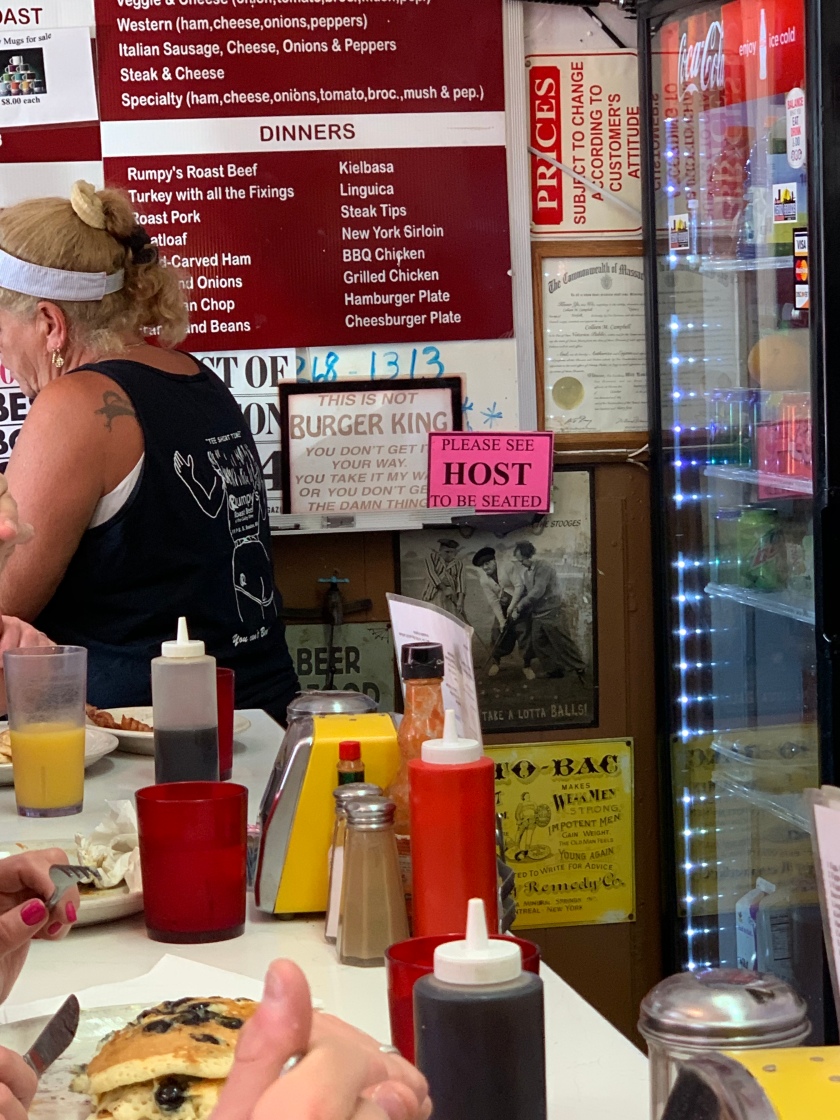 Another establishment I visited in  Southie is Murphy’s Law. I chose it because it looked like it knew how to pour a good pint of Guinness. I went to open the door and sadly it was locked. Apparently, a lot of the local joints close on July 4th in Southie so workers can spend time with their families. Shit!

So I started to google other possible watering holes, when a lady with keys turned the corner to open the door, I asked, are you opening? She said no, but I am going to have a few drinks with my family if you want to drink with us. I was happy to oblige.  The lady is Peggy Ann she has been part owner for 23 years, she is with her cousin and her cousins husband Fitzy who is from Southwest Ireland. We start to talk about Ireland and how I was married a year ago in Kildare, we talk family, how my wife is at the hotel taking a nap because she is 8 months pregnant, how my Father-in- Law was the first to bring Guinness to South Dakota at his bar Durty Nelly’s. All while Peggy Ann pours us a perfect pint, as I expected.   We talk and laugh some more and then Peggy Ann mentions how much the neighborhood is changing and she doesn’t know how much longer a place like hers will be able to stay open.

The Seaport (Innovative) District is right across the bridge from Murphy’s Law, across the street is 56 acres that was bought for about $250 million 5 years ago that they speculate could go for a billion now. Peggy Ann tells a story about an acquaintance who came into the bar one day ecstatic, he says “I just sold that small old post-office building for $9 million,” then she laughs and says the jerk didn’t even offer to buy a round. Fitzy is about to go on the roof to see if he can fix a leak, then they are headed to a neighborhood hangout, they invite me, but I tell them I better get back to my wife. 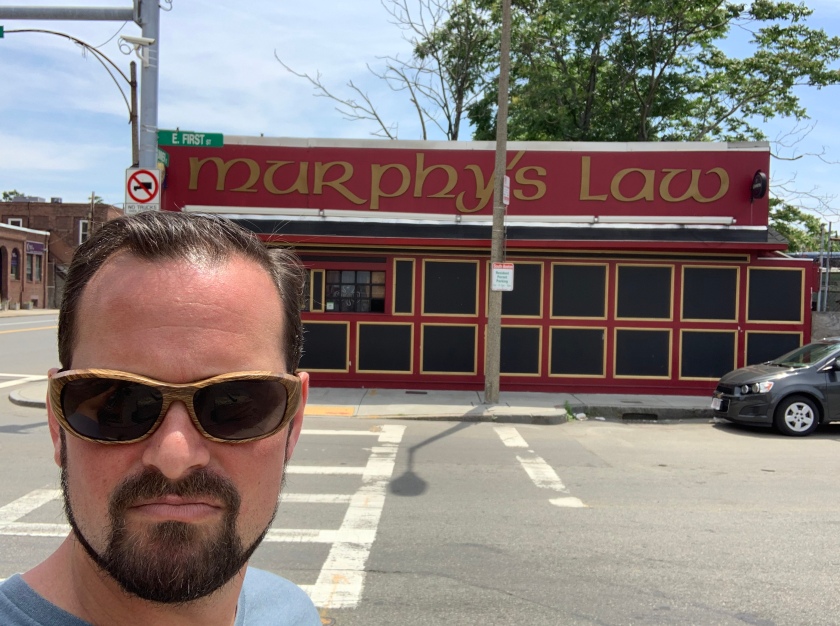 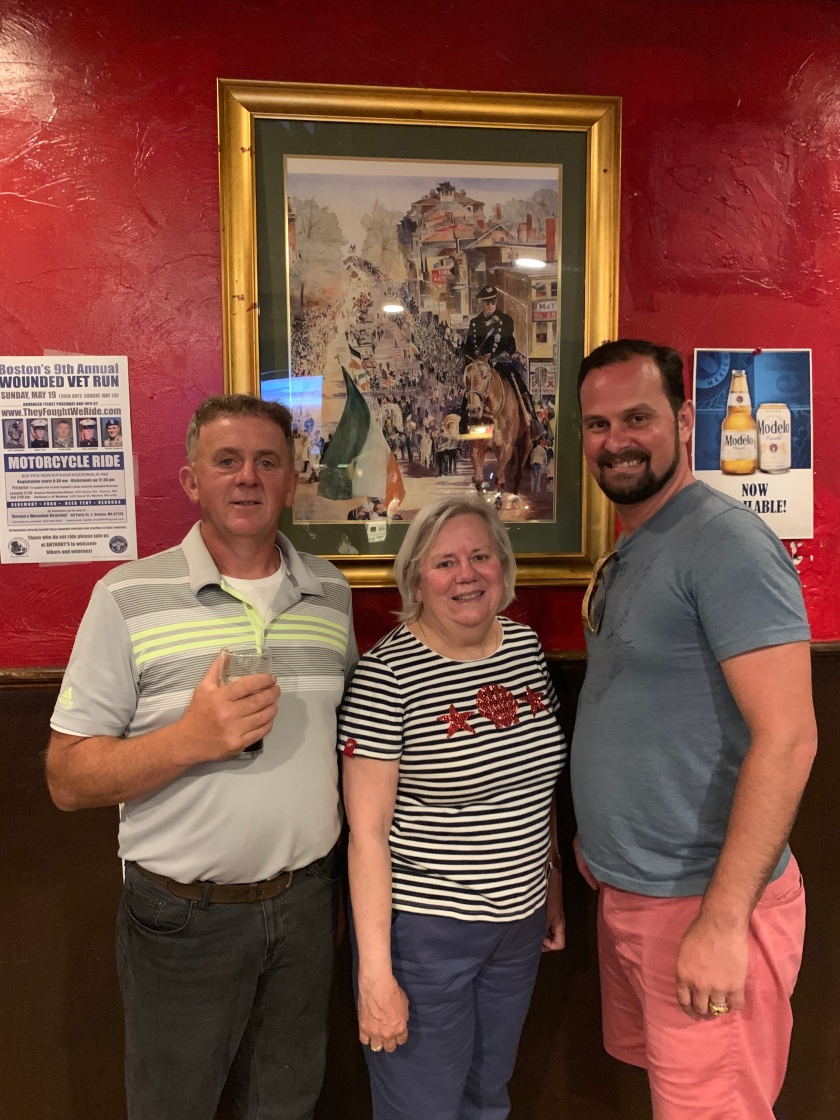 Our visit to the North End with MacKenzie’s former co-worker shows similar growth and uneasiness. She gives us a tour of the Rose Kennedy Greenway – which our tour driver would later say to us “for those of you from out of town thank you for paying for our beautiful park space” that is because the Greenway is the result of the famously disastrous, but ultimately successful Big Dig transportation project. We go to dinner at Lucca which has delicious pasta. The neighborhood is packed with tourists. She explains to us how Boston loves their open space and that neighborhood groups, while fighting for affordability are also causing prices to rise by limiting development. The parks and public spaces in Boston are beautiful but she is right it’s a two way street you must have high density if you want affordability and that means some open space may have to be sacrificed. Later in the trip we hit up Regina Pizzeria in the North End as well, a must try imho. 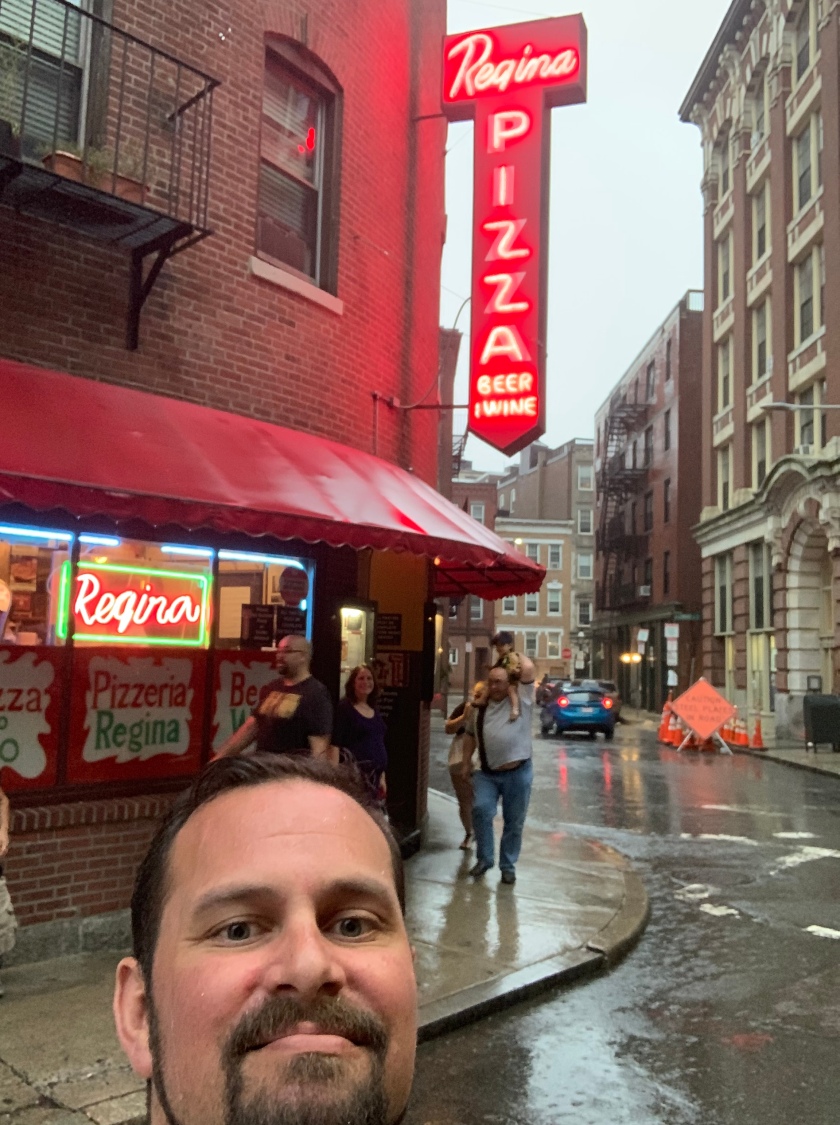 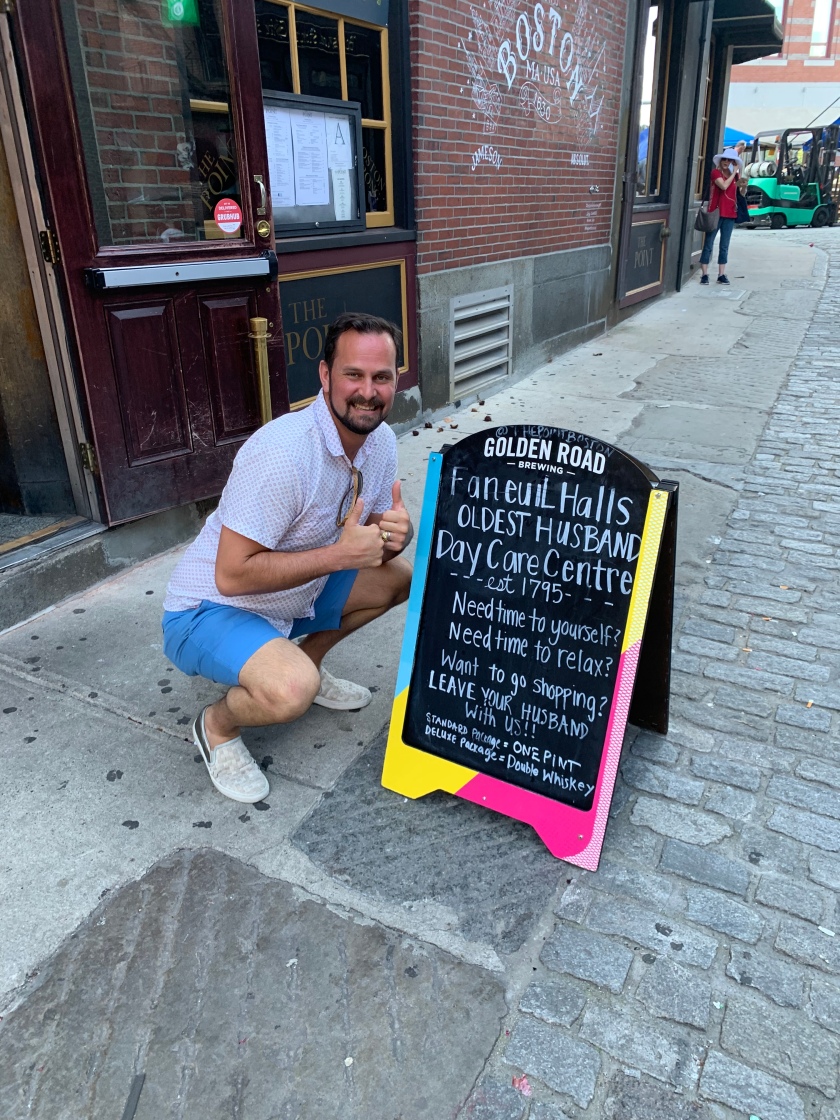 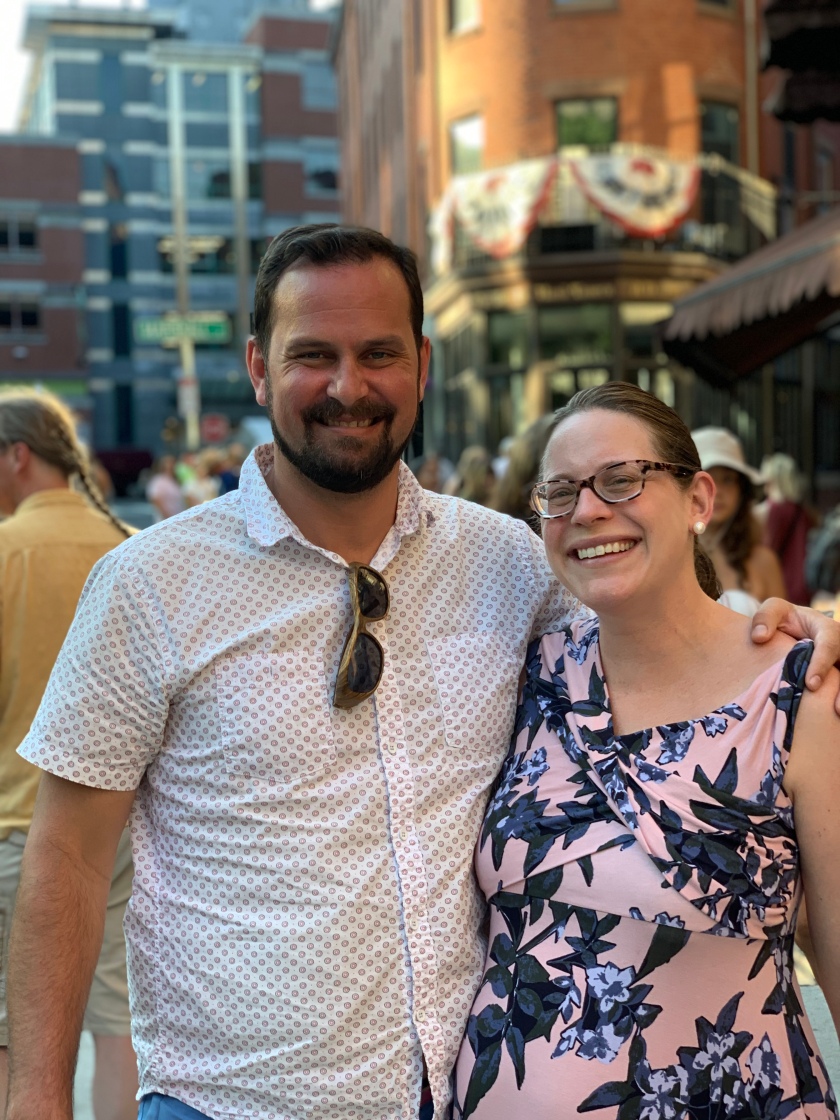 Southie, the North End, Chinatown are great neighborhoods in this fantastic city, but no matter where I went you could tell their was a sense of uneasiness about how long neighborhoods like these would exist in Boston.

Boston is a spectacular example of success and growth, but a lot of old Boston is feeling left behind, pushed out and eventually re-developed as we saw throughout our trip. Especially the Seaport (Innovation) District right between Downtown and Southie, this part of Boston is growing at the rate of Barry Bonds head on juice and if Boston fails to implement the correct inclusive growth policies that lifts all boats, Southie will be steamrolled like the home run records Bonds brought tumbling down. In  my opinion like the steroid crazed baseball era, while it was fun at the time, in the end if neighborhoods like Southie fall, Boston will regret it in the future.

I’m all for growth I am not one of these socialist “stop all development” types, but unique neighborhoods like Southie are what make a city interesting and what draws me to visit them, otherwise why travel to a destination to get a bland homogenized version of the city you live in or near. Keeping your city unique will be a tough, but necessary challenge in the near future. The question is how to best do it.

Below are some more places we visited and pictures from our trip. Boston is a great time and I highly recommend a visit. 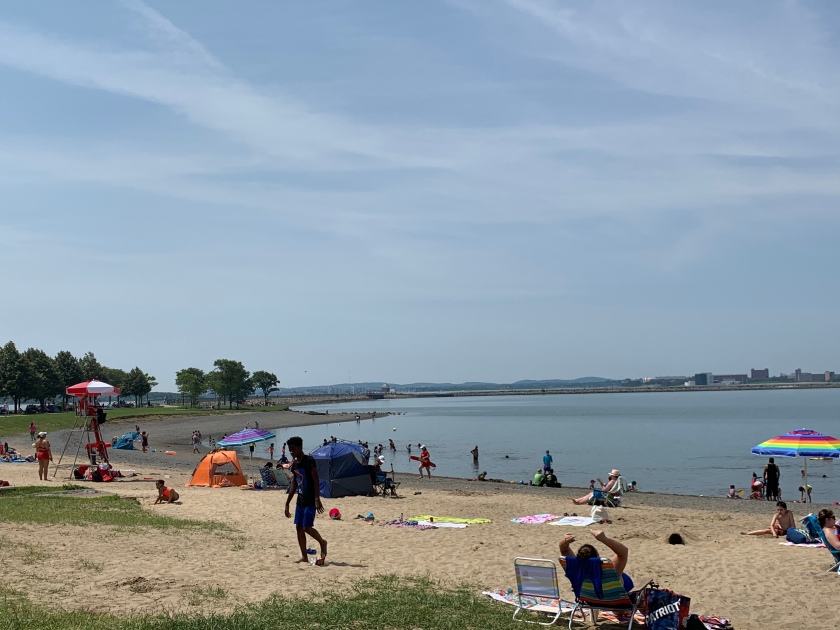 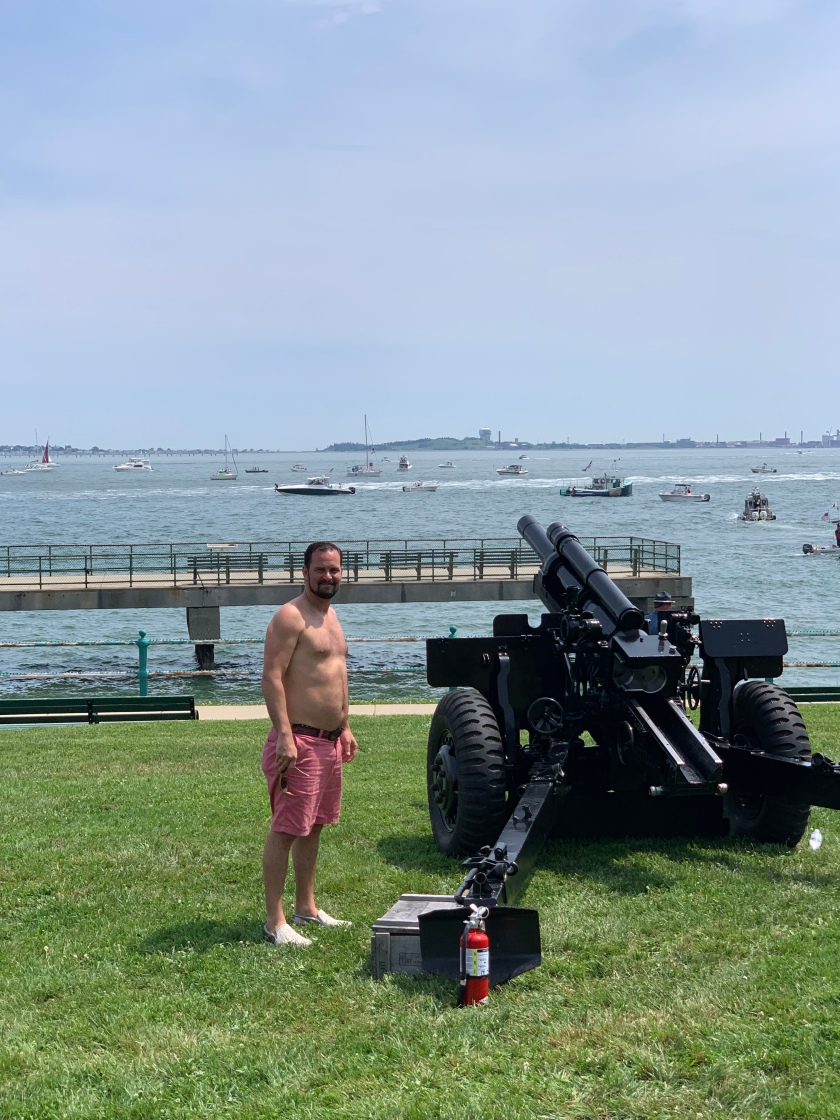 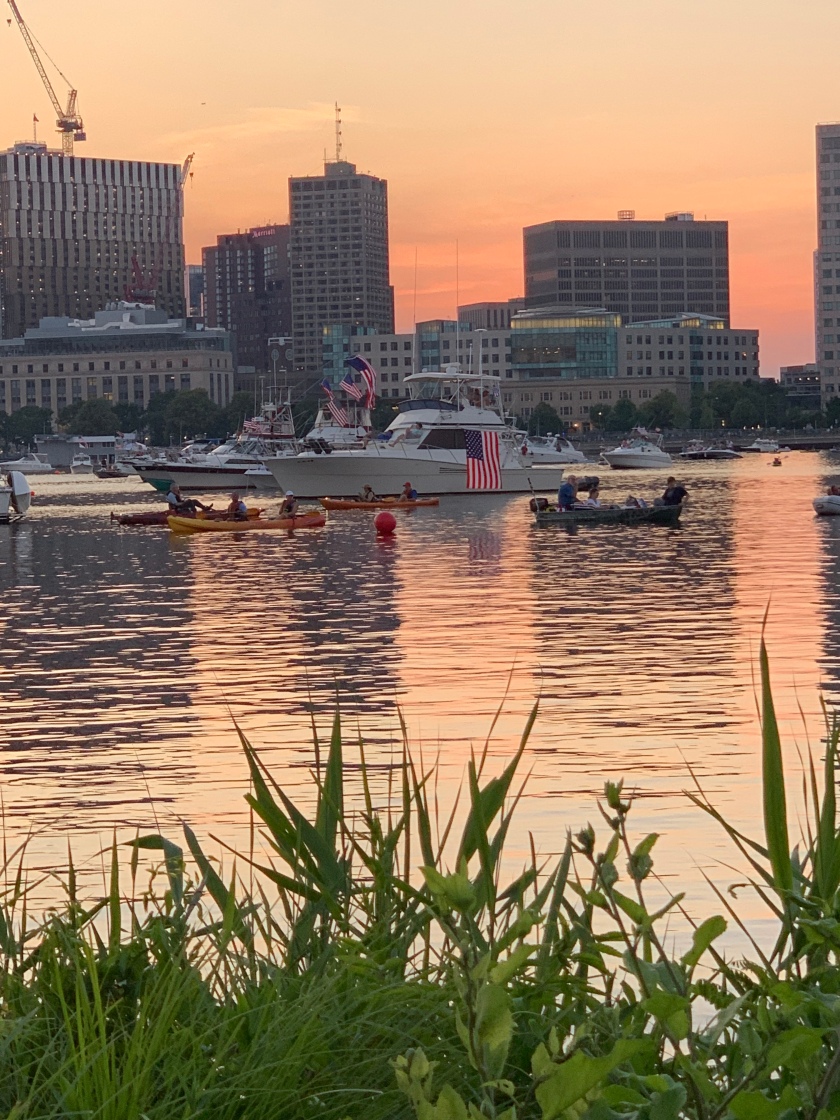 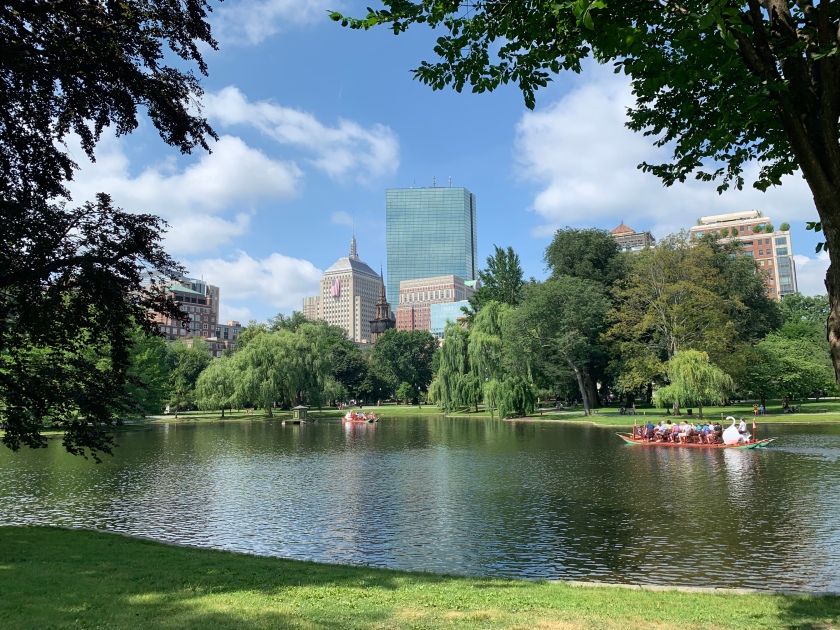 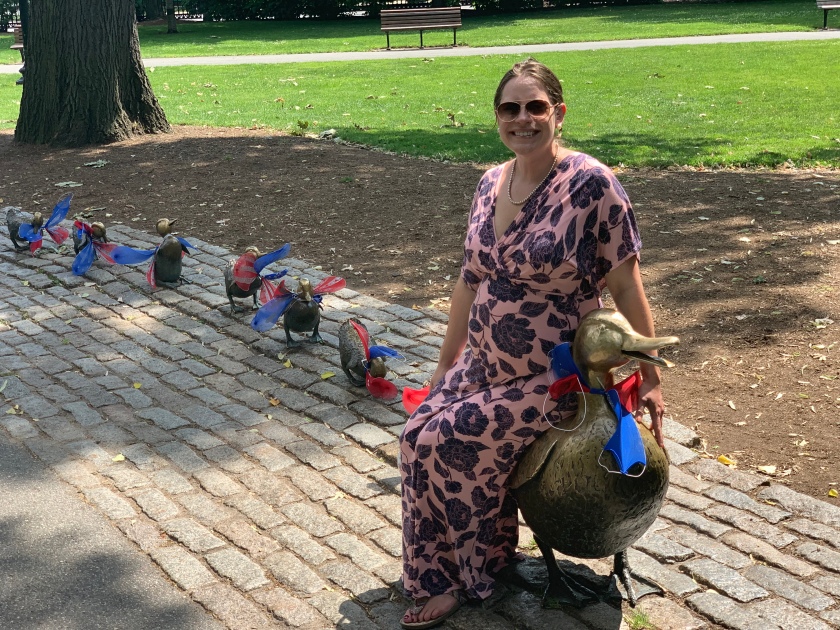 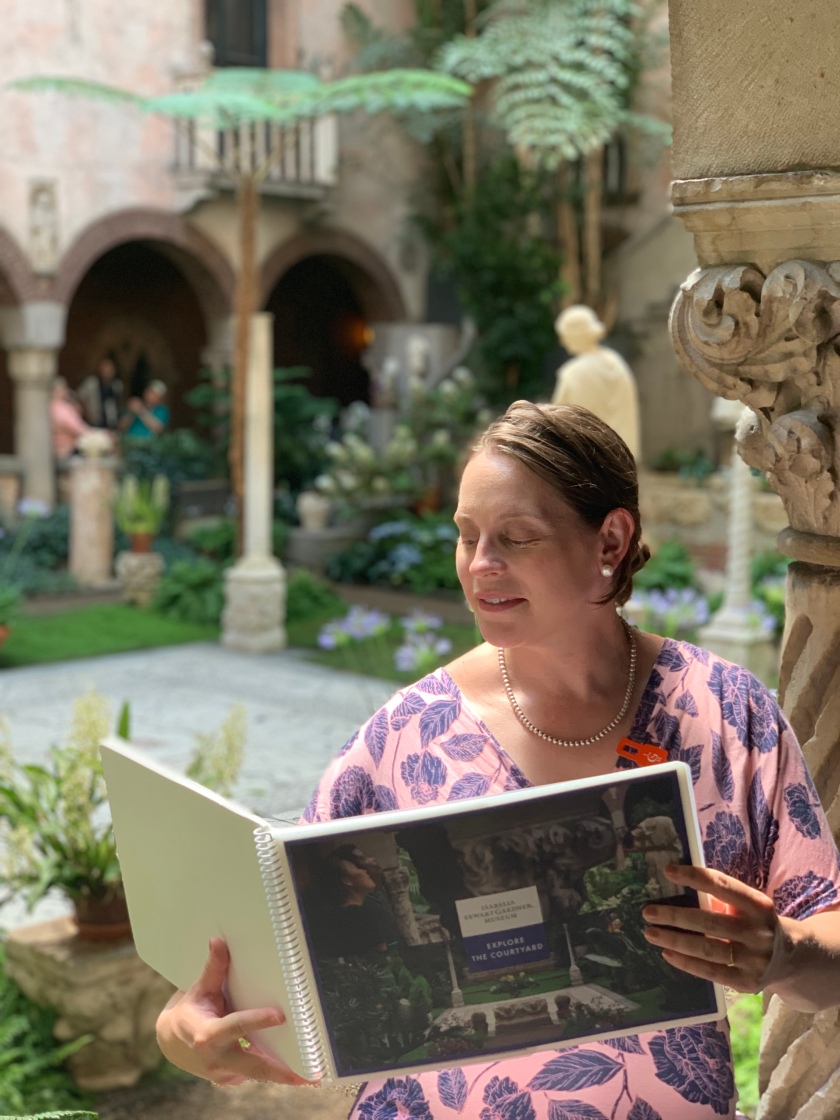 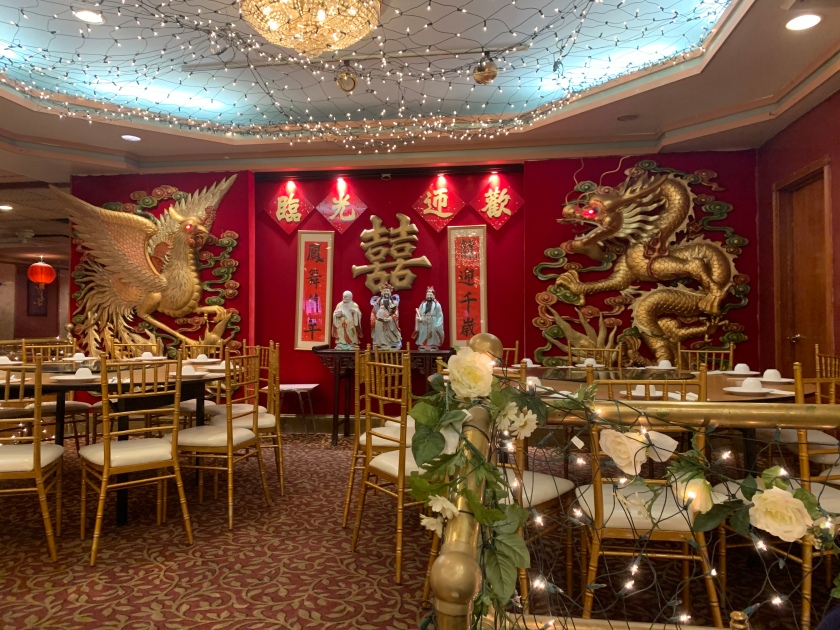 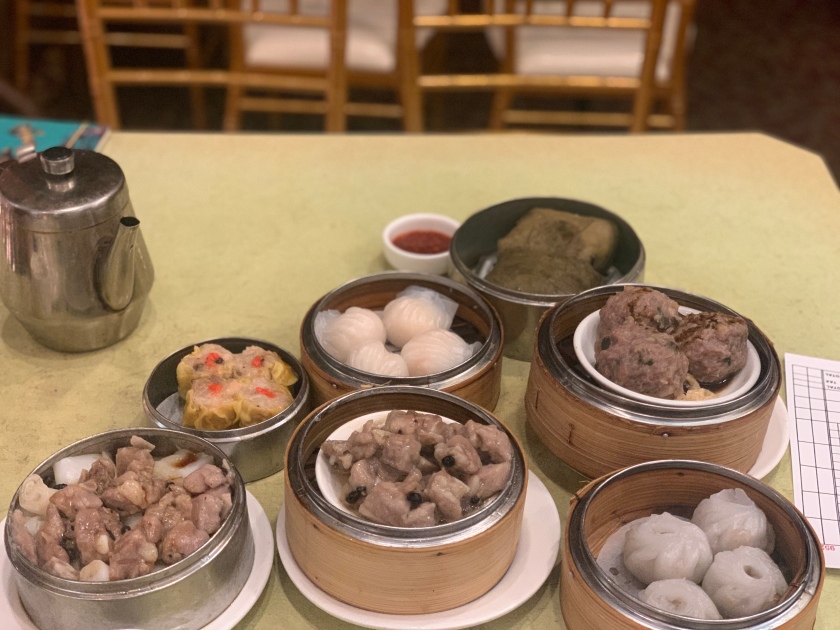 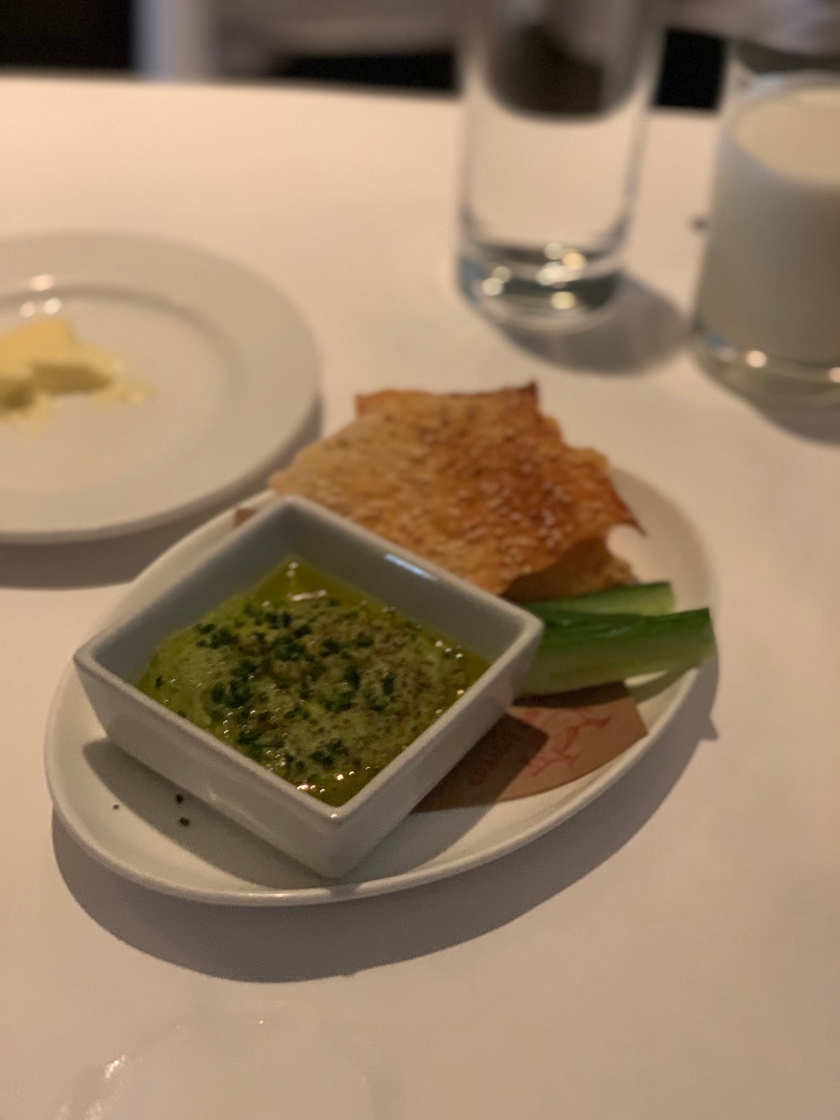 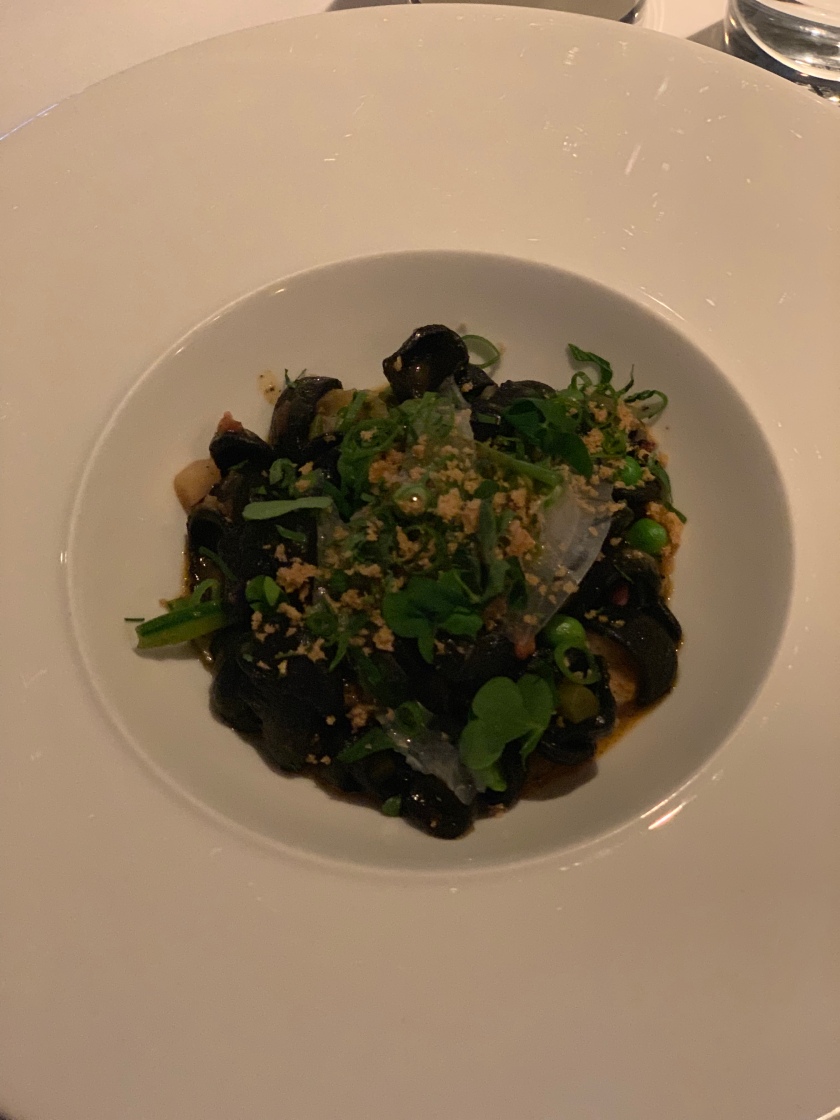 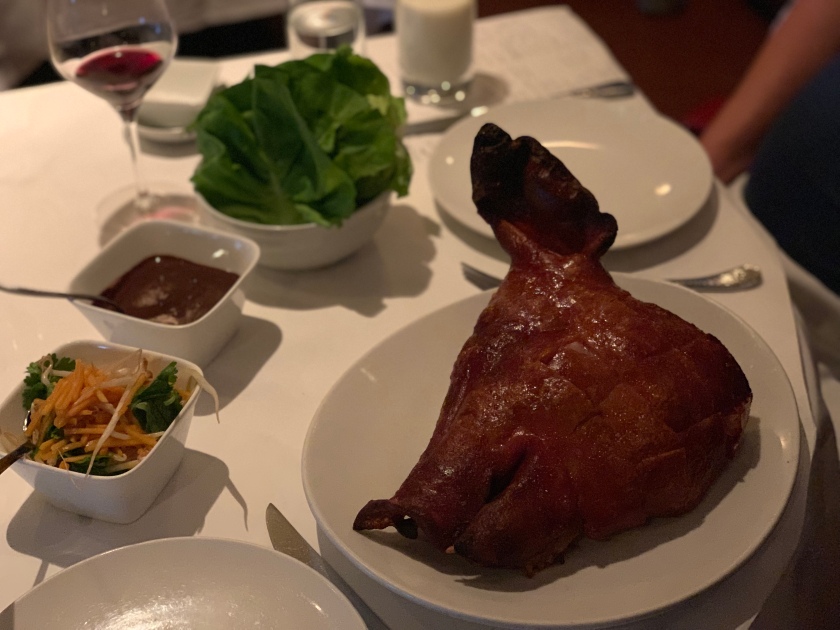