It was Thursday and my friend and I were supposed to play racquetball and then head to our cigar bar, Cappelli Bros Cigar Company. Of course, plans are made to be broken though and since the gym was painting the racquetball courts we decided to head to dinner instead. We chose Jamonera, I love tapas and I love red wine so places like Jamonera are always held to a higher standard for me. As soon as we got there I ordered the Syrah-Garnatxa and stayed with that for the night, as I am a big fan of wine with spicy notes, especially for salty food.

To start we ordered a small plate and an option from the cured meats and cheeses. The  Fava Croquetas that were topped with lump crabmeat, whipped goat cheese and Meyer lemon was our small plates choice. The Fava Croquetas have a very similar taste to a falafel, while the addition of the other elements to the dish led to a creamy, lemony crab taste that made me think this dish would be served well in sushi restaurants as a Spanish crab roll. The fresh crab and lemon made you craving for more of those ingredients and kind of overtook the Croquetas  as the centerpiece, but it was still delicious. Up next came the Chef’s Board which came with two meats and two cheeses, we didn’t supplement the board with the jamon iberico de bellota, but I have regretted it since and I suggest you do if you go. The chorizo and blue cheeses were the standouts on this dish, with the blue having a nice bite to it and the chorizo have a great salty start with a spicy kick that left you wanting more. 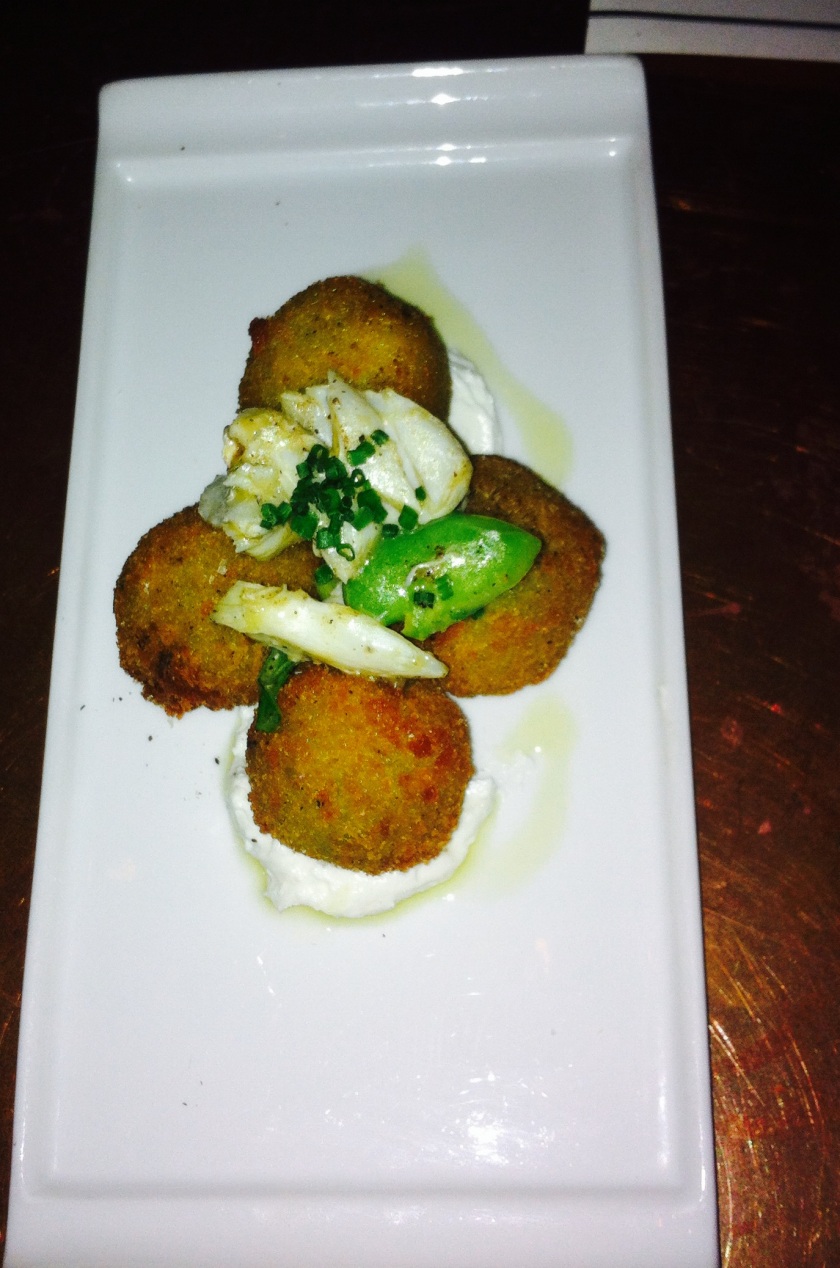 For our second course we ordered one dish off of the salads and vegetable and toasts and cocoas menu each. For the vegetables we ordered the Charred Shishito Peppers with fingerling confit, cucumbers, roasted peppers, creamy lemon dressing, whipped basil miticreama and hazelnuts. The Shishito peppers had a beautiful char to them which really allowed the dished to flourish with the texture of the whipped basil miticreama, citrus flavor of the dressing and nuttiness of the hazelnuts. The Wedding of the Anchoas was my favorite dish of the night, and yes this marriage was made in heaven and meant to last. The marinated Spanish boquerones and cantabrian anchovies came on top of toast with roasted red peppers, onion seed shoots and a tomato-almond pesto. The dish started out with a mild anchovy taste from the boquerones followed by a really sweet flavor from the roasted red peppers and tomato-almond pesto and finished with an explosive wonderful salty, fishy anchovy  zest that paired wonderfully with a slight sip of the red I was drinking.

For the final course, I odered the grilled skirt steak and my friend ordered the mussels and chorizo. These were both solid dishes the skirt steak was cooked great and had a nice salty taste but the potatoes were a little undercooked for my liking while the mussels were fresh and had the nice kick from the chorizo. But if I had to do it all over again I most likely would have tried to get my friend to split one of their Paella’s with me, I love Paella, especially done right with the crunchy rice at the bottom.

After dinner we headed over to Capelli Brothers Cigar Company for some whiskey and cigars. We pretty much split a bottle of Bullit Bourbon between each other. We had a night in Philadelphia that I can only imagine is the closest you will come to a replica in this area as a night you would have in Spain. We hung out, we drank and we made new friends, it was a great way to spend a weekday night.

This was a 3.5 Tizzle experience but I think if I went back to Jamonera and ordered the Paella it definitely could have been a 4 or 4.5.