5 o’clock came and work was finally over, it was a beautiful day out, 86 degrees, low humidity, hardly any clouds in the sky and I could not wait to get changed and go out on the town. If Philly had weather like this year round it would be San Diego, unfortunately we have about 3 days of that perfect weather called spring.

I headed over to Time Restaurant, Whiskey Bar and Taproom and ordered the He said, She said, which is made of Gin, St. Germaine, thyme simple syrup and peychauds bitters, the thyme was a great touch and gave the drink an elegant flavor. Gin is always a favorite of mine to start the night out on a spring or summer evening, it’s so light and refreshing. After I finished my first drink my friend met me at the bar and we ordered up two vodka martini’s with olives. As we drank these martini’s at the bar, with windows open behind us we listened to the music from the band playing in the corner, it really set the mood and made me realize, yes summer is here and it is time to have fun. After a couple more martinis we decided to order some food. We ordered the grilled octopus with white beans, nicoise olives, and fennel citrus salad, this dish was surprisingly amazing. Grilled octopus in my opinion is one of the hardest dishes to cook correctly and it was cooked spectacularly, beautifully charred on the outside with a nice smoky flavor but yet not too chewy on the inside. The nutty tasting nicoise olives, the mild licorice flavor and crunchy texture of the fennel and the booming tartness of the citrus meshed tremendously well with the grilled octopus and provided us with a great dish to start the evening. Up next came the Artisnal cheese dish, this plate of stankiness was nothing to sniff at, it was diverse in flavors and it really came together well to make for an excellent dish. The final two dishes we had for the night I was little disappointed in though, although I cannot blame them for the bone marrow because they had to accommodate for my friends nut allergy, I would rather have had them just give me the bone marrow plain than overpower the taste of such a delicacy with the citrus salsa they ended up placing atop of the dish. The shrimp ceviche was also a disappointment as it too was overpowered with citrus flavor so much so that you could hardly taste the shrimp at all. 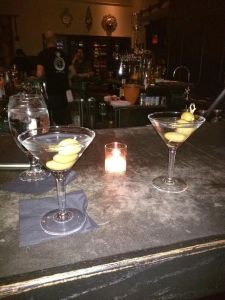 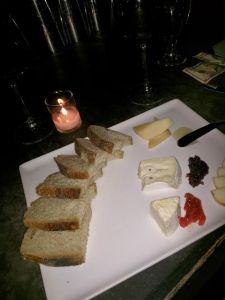 After dinner my friend wanted to check out a special event at Franky Bradley’s called Franky’s Foxes. Franky’s Foxes is a partnership between Franky Bradley’s and the temerarious Foxes, which includes some of the most talented drag queens in the city of Philadelphia. After grabbing some Lagunitas Pils from the bar I sat down in my seat when of course the first act was late to the stage and the host of the show had to stall, so who does she pick to help her stall, you got it, moi. As I walked up to the stage, I knew I was out of my element and she could obviously tell I was in over my head, first thing she says you know I called you up here for a reason right, at this point I think, I awkwardly giggled and she says are you straight?  And I said yes as everybody laughed, I realized that this was the first moment in a long time that the cat got my tongue and she sent me back to my seat. I tried my best, but I don’t think you will see me in any shows anytime soon. The show went on and it was extremely entertaining. As the show was winding down I ordered an old fashion to nip on and end the night. 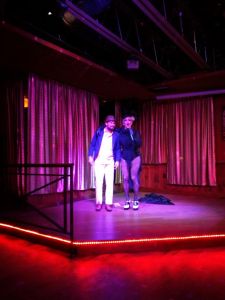 Sunday was perfect, it was another low humidity, sunny and blue sky day. I decided to make my first trip to Spruce Street Harbor Park with a friend and it was marvelous out. We grabbed a few beers, sat on the deck and had a great conversation with a couple sitting next to us, whose grandkids were driving from Wisconsin to visit them the next day. Spruce Street Harbor Park is a great time for all ages and allows you to relax and drink beers if you can find an open seat. It really is one of the best attractions on the Delaware River. 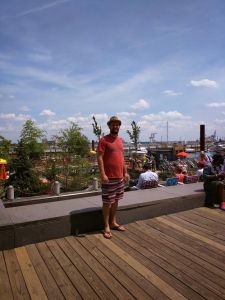 After a few beers we headed over to Gaslight, we ordered some more drinks, the west coast oysters and the chicharrones. The Gaslight has a fabulous atmosphere with windows that open wide and a bright white paint job plus it is in a great location, unfortunately the times I have been here before I have always wanted to like it but I have never been that impressed with the food. Since the last time I came though they had changed chefs and even though we only had some snacks I could tell by the freshness and preparation that this place may finally be on the way to meeting its expectations. The west coast oysters were delicious, so fresh, briny and creamy, it tasted like I was eating them directly out of the Pacific (except that they were clean). The chicharrones texture was exactly how I like it, crunchy, while the flavor was salty and with the addition of the lime and hot sauce made for a citrusy tang that was truly exquisite for a snack. Although I would have liked a little more heat from the hot sauce. 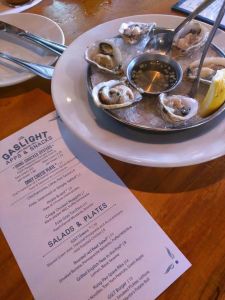 Next up came Zento, we ordered some lychee martinis and a plate of the sashimi. The martinis were deliciously sweet as we sat outside and people watched. The sashimi was as expected, excellent and fresh. I am not one who eats my sashimi with too much soy sauce nor wasabi, so I really need the fish to taste fresh and this did.

After a long day of drinking in the sun, I decided to head home and take a nap and a shower and told my friend we would meet up again at Rouge later in the night for dinner. It was beautiful night, not too warm, clear skies people walking all around Rittenhouse square park, which was the biggest surprise to me because Philadelphia is usually desolate on Memorial Day weekend but since it has started to improve as a destination city this trend has reversed. After the long day in the sun with beer and liquor it was time for relaxation and I switched over to red wine. My friend and I ordered the tuna tartare to split.  This is the way you make a tartare, it was fresh and spicy, yet those flavors were not so overwhelming that it took away from the flavor of the tuna, they did what they were supposed to do, compliment the taste of the raw tuna and boy was it delicious.  After a few more reds, we ordered dinner I ordered the Rouge burger and my friend ordered the steak salad. The Rouge burger is on my top 3 list of burgers I have ever had, not to mention the frites that come with it are a great side to pick on throughout the meal. The nutty Gruyere, fresh tomato, juicy garlicky 12 oz of beef on top of a tasty challah roll, just thinking of it now makes my mouth water, it really is a must have in Philly, especially on a beautiful night overlooking such a gem of a park. My friend ordered the hangar steak salad, rare, and this was not a disappointment either. There was more steak than salad on this dish made up of mixed greens, grape tomatoes, roasted peppers, red onions and topped with a large scoop of Roquefort cheese and a balsamic glazed shallot dressing. The buttery texture and slightly salty, pungent, almost addictive aftertaste of the Roquefort married extremely well with the irony flavor of the rare steak and sweetness of the balsamic. After dinner we met some friends at Twenty Manning, which is another hot spot to check out on a beautiful night for dinner and drinks, for some nips to end the night. 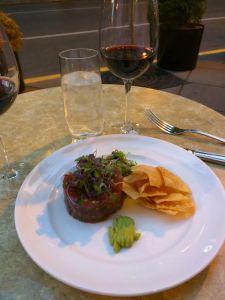 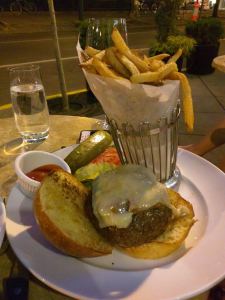 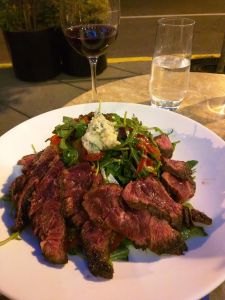 Memorial Day weekend was a 4 Tizzle experience. It was beautiful out and all of the spots I went to were relaxing and fun times.

Time – 3.5 Tizzles – Great band and you have to try the Grilled Octopus salad

The Gaslight – n/a – must try the west coast oysters, have to give this place one more chance to win me over

Zento – n/a – sashimi and lychee martini were both must gets

Remember to enjoy the time you have on this earth.